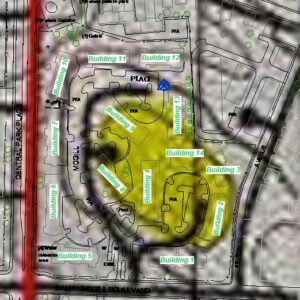 (ABOVE) This crude topo map from the COA GIS site shows how McGill Place sits on top of a hill (yellow area). 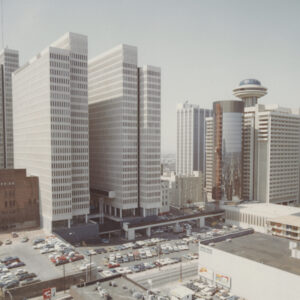 (ABOVE)  A 1960’s photo of Peachtree Center, built as a modern “space-age” business metropolis. Note the flying saucer which is the present-day Polaris Restaurant. 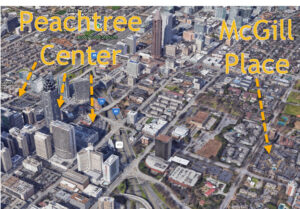 (ABOVE) The spatial relationship of Peachtree Center and FWW where McGill Place is situated. 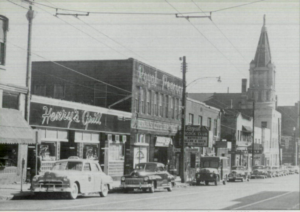 (ABOVE) Sweet Auburn Historic District in the making. 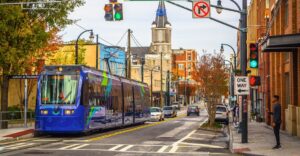 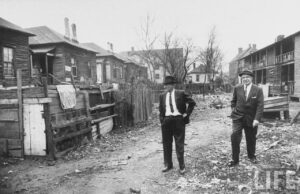 (ABOVE) Less affluent citizens many times have to live in areas prone to flooding. In the lower land areas of FWW this photo shows Mayor Hartsfield walking through the worst part of “Buttermilk Bottoms” in 1959. This photo is credited to be part of the urban residential area adjacent to the Civic Center in 1968. Thus, along with the 75/85 connector Interstate project and a desire to get people back living in the city,  in the 1980’s COA urban renewal turned the residential area surrounding Buttermilk Bottoms into our FWW condos. McGill Place was located on a hill showing that the developer had first choice of where to build.
Photo credit: LIFE magazine, 1959.  Photographer:  Grey Villet http://www.atlantatimemachine.com/
downtown/buttermilk_life_02.htm

1986: The best places to build are on hills for good drainage and views, while 2nd choices are in the lower areas — castles ALWAYS sit on hills and so does McGill Place!   In 1986 McGill Place was one of the first communities built in what is now Fourth Ward West. Having a choice of newly cleared land for the Residential Enterprise Zone policy under Mayor Andrew Young, McGill Place African-American developer Herman Russell (1930-2014) choose a favorable high spot.
Building plans were prepared by Pucciano & English, Inc. and Hassan Associates, Architects and filed for record with the Clerk of Superior Court of Fulton County, Georgia October 28, 1986.  Because of it’s elevated topography and alignment with downtown, the architects thoughtfully aligned McGill Place windows towards the views of downtown and it’s tall buildings– our city views are wonderful ! McGill Park across the street did not get this thoughtful treatment.

PROLOGUE – TIME TRAVEL TO THE EARLY 1960’s:  A few blocks to the southwest in Downtown architect John Portman (1924-2017) was having a vision of Peachtree Center, a modern “space-age” business metropolis. Taking a huge gamble young Portman designed and developed the Atlanta Merchandise Mart in 1961. From then until the 1992 Suntrust Tower, over 16 adjoining buildings were built, bringing work life and economic vigor into Atlanta.

URBAN FLIGHT: In the 1960s- 1980’s Downtowns everywhere in the nation were being deserted as people moved to the then shiny new suburbs. Atlanta shifted course early thanks to John Portman.  In 1986 McGill Place was built to attract people from the suburbs to return and live in the city. Today as the suburbs get old and dusty with age, cities have become the new shiny, adventurous places for the young and empty nesters, back then it was just starting.

PROLOGUE – TIME TRAVEL TO THE  1940’s and 50’s: Four blocks south is SAND (Sweet Auburn Neighborhood District) and the MLK Historic District where Martin Luther King came to consciousness, his birthplace in 1929 and in 1968 his memorial.

When Martin Luther King came up as a young man in the late 40’s, and 50s Sweet Auburn was one of the wealthiest African-American neighborhoods in the world, abetted by the strongest African-American University system in the world, now called the Atlanta University Center Consortium.  This was a time of gradually increasing information generation and exchange: TV, newspapers, a respect for science, WW2 men returning from seeing how the rest of the world operated and utilizing the GI bill to become educated– people combining experience and information to make things better.

As the head of the Civil Rights Movement Martin Luther King was at the forefront of this information revolution. Although Jim Crow (a caste system which legalized the marginalization of African Americans) had been around since the Civil War, improved information flow and experience finally allowed people everywhere to realize the cultural chokehold of a person’s skin tone to determine their place in life. In the USA this caste system was systematically struck down in all courts of law and slowly began to allow people of all tones of skin to pursue their dreams, making the world more vibrant and multi-dimensional, including across the arts, economically and socially.

THE CITY TOO BUSY TO HATE: McGill Place and Ralph McGill Blvd. (which turns into Ivan Allen Ave. a few blocks west at Peachtree Street) are named after people who helped transition all the colliding cultural information of the 1950s-1980’s, enabling people to work together and create the international and sophisticated city of Atlanta we know today. Both Ralph McGill (b1889-d1969) , editor and publisher of the Atlanta Constitution from 1938-1996, and Ivan Allen (b1911-d2003) Atlanta mayor from 1962-1970, provided pivotal journalism and leadership for transforming a segregated and economically stagnant Atlanta into the prosperous city of today. Although Mayor Hartsfield (1890-1971) also helped create this phrase, during Mayor Ivan Allen’s administration Atlanta was officially dubbed “the City Too Busy To Hate.”

Overlapping the Civil Rights Movement and Portmans’ building visions in 1961, the merging of Interstates 75 and 85 formed the Connector, demolishing and clearing much of what is now Fourth Ward West (FWW). The Civic Center soon arrived in 1968 (now being re-redeveloped into a multi-use center) and the Georgia Power buildings in 1976-1981.

From Mayor Andrew Young’s time in office (1982-1990), what is now McGill Place became prime real estate when the COA (City of Atlanta) visionaries began eyeing possible land areas adjacent to downtown for a Residential Enterprise Zone. “Ok, we (John Portman’s buildings) brought workers back into Downtown” thought City Leaders, “lets get them to live here too! ” Further motivating urban redevelopment was nearby Buttermilk Bottoms, an unplanned, sometimes haphazardly-built residential area in a low-lying area prone to flooding, where the Civic Center and Central Park are now.

Thus was born Fourth Ward West as a land of open space and condominiums, near the 75/85 Connector and Peachtree Center. McGill Place (1986) and Sienna (1989) are both sitting on hills, telling us that they were built early in the redevelopment process.

Further to the east 1900’s-1940’s single-family homes exist, as well as multi-family homes. The multifamily homes were built in the swath of the Great Fire of 1917 to house the people who lost their homes, many now owned by Wingate. This fire is GRANDLY celebrated as Fire in the Fourth in the nearby neighborhood Sweet Auburn. (See Neighbors)

Do you ever wonder why there is so much open space, grass and trees around Georgia Power and the early condos in FWW, while newer ones nestle up to the zero lot line with only thin strips of grass? ANSWER: To persuade people to move back into Atlanta developers thought things had to resemble the suburbs with grass and trees.

Do you ever wonder why there is a Pulitzer Circle within McGill Place? ANSWER: Atlanta Constitution Editor Ralph McGill won a Pulitzer Prize for his distinguished writing during 1958  in his editorial “A Church, A School….” and for his long, courageous and effective editorial leadership. More HERE.

So enjoy the unique McGill Place Land located blocks from Downtown! All our land and trees are beautiful and from another age with different information and built values, the best of which we enjoy and sustain today. Woof! My dog LOVES McGill Place! Lets take good care of it!
Resident Frances Hamilton, AIA LEED AP (BD+C)